The field of Galactic astronomy has revolutionized astrophysics in the last twenty years. The discovery of the extended halo of the Milky Way composed of tidally shredded dwarf satellite galaxies and globular clusters gave rise to a rapidly developing approach of Galactic archeology, one of the major drivers for the next-generation wide area surveys such as LSST, of which JHU is an institutional member. Furthermore, the Milky Way offers an opportunity for detailed high-quality observations of the interstellar medium, star formation and exotic stellar behaviors. But perhaps none of the astronomical discoveries of the last 20 years has as profound impact on humanity as the discovery of exo-planets — planets around stars other than the Sun. JHU faculty members with primary interests in Galactic astronomy are Profs. David Neufeld, Kevin Schlaufman, David Sing, Rosemary Wyse, Nadia Zakamska, and Research Prof. Luciana Bianchi.

With LIGO’s recent discovery of neutron star and black hole mergers and upcoming time-variability surveys like LSST, the exploration of the variable universe is the emerging frontier of astrophysics. Prof. Nadia Zakamska’s current work is focused on exploring the discovery space of variability surveys through studies of young stellar objects, main-sequence binaries, evolved compact binaries and extragalactic variables — active nuclei and blazars, with a particular interest in teasing out rare and unusual objects from large datasets. For example, a recent series of papers in collaboration with undergraduate students Vedant Chandra and Evan Petrosky and graduate student Hsiang-Chih Hwang takes advantage of the synergy between optical (Gaia, SDSS) and infrared (WISE) variability surveys to discover and characterize short-period stellar binaries on the main sequence, as well as unusual white dwarfs.

Left: the distribution of variables on the sky as measured by WISE. The plane of the Milky Way and the Magellanic Clouds are clearly visible. Right: the first direct measurement of the formation and evolution timescale of short binaries (Hwang and Zakamska 2020) using the new “kinematic age” method enabled by Gaia. The best-fit model (red) demonstrates the predicted kinematic distribution of short-period binaries if they are created at 1 Gyr and disappear at 10 Gyr after star formation. 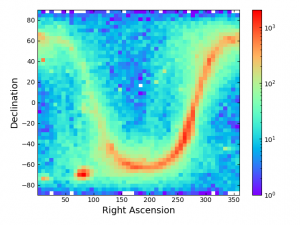 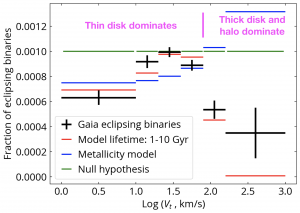 Prof. Rosemary Wyse is one of the leaders of the RAVE survey and a world expert in Galactic archeology, conducting studies of the structure of our own Galaxy from both theoretical and observational perspective.

Prof. Luciana Bianchi characterizes elusive components of the Milky Way stellar populations using optical and ultra-violet observations, including those by NASA’s GALEX satellite. Her census of hot white dwarf stars, with over an order of magnitude increase from previous catalogs, provided new insight on their progenitors and their contribution to the chemical enrichment of the Milky Way Galaxy. Using optical and ultra-violet spectroscopic data, Prof. Bianchi derived new diagnostics of the surface chemistry of evolved stars. She also studies hot massive stars, which are the main driver of the dynamical and chemical evolution of galaxies. She used the Hubble Space Telescope as well as data from JHU-built FUSE satellite to measure physical parameters of such stars, finding that they were less hot and less luminous than previously thought. She also uses Hubble Space Telescope and GALEX to study star formation in external galaxies. This work is revealing star formation in sites where it was never expected or seen before, as well as providing insight into how young stellar populations form and evolve in different environments and conditions.

Our nearest big neighbor, the Andromeda Galaxy (M31), seen here in ultra-violet light as detected by the GALEX satellite

Closer to home, we find that the interstellar medium of galaxies is often rich with molecular gas. In some circumstances, naturally-occurring masers can form, producing extremely bright and collimated beams of radiation. Prof. David Neufeld is an expert in all aspects of molecular astrophysics, and uses molecular diagnostics to elucidate the properties of astronomical systems from planets and comets to stellar atmospheres to molecular clouds. His research using SOFIA and Herschel observatories has resulted in discoveries of several new interstellar molecules which provide key information about the interstellar medium. Characterizing diffuse UV emission has long been a goal of Prof. Richard Henry‘s work.

The last decade has seen an explosion of interest in the formation of planetary systems, now that we can detect hundreds of extra-Solar planets as well as conduct detailed studies of many of our own Solar System’s planets through a variety of space experiments. A number of CAS astrophysicists are deeply involved in these efforts, developing new techniques for detecting extra-Solar Planets (Prof. Holland Ford), and studying the atmospheres and magnetospheres of other planets in our Solar System (Prof. Warren Moos).  Following up on these exciting developments, Prof. Colin Norman has organized an interdisciplinary program in astrobiology.

Prof. Schlaufman is interested in exoplanets and planet formation as well as metal-poor stars and Milky Way formation.  Most of his recent projects have used the architecture, orientation, and host star properties of exoplanets to explore the physics of planet formation.  He’s also leading the first all-sky search for the most ancient stars in the Galaxy, with a special focus on the bulge.