Galaxy formation is at the foundation of modern astrophysics. Studies of stellar motions in the outskirts of galaxies and of the distribution of galaxies in space have shaken the foundations of modern physics and revealed that 96% of the energy composition of the Universe is due to Dark Matter and Dark Energy. The most exotic of astronomical objects — black holes − are routinely found in centers of nearby galaxies and are now thought to have made a profound impact on galaxy formation. The cycle of creation of chemical elements by a galaxy’s generations of stars provides the basis for our ideas about the origins and prevalence of life itself. Explosions, disruptions and mergers of stars and black holes in external galaxies fuel an exciting emerging field of time-domain astrophysics.

The faculty members with primary interests in extragalactic astronomy include Profs. Timothy Heckman, Colin Norman, Nadia Zakamska and Research Prof. William Blair, and of course lines are often blurred between extragalactic astronomy and cosmology. Extragalactic astrophysicists at CAS study galaxy formation from the dawn of the observable universe, including star-bursting galaxies and supermassive black holes in the centers of galaxies. A major strength of the extragalactic astronomy effort at JHU has been our membership and leading role in the cutting-edge wide-area optical surveys: SDSS-I, II, III, IV (currently ongoing) and Pan-STARRS, and Sumire / PFS in the near future. But extragalactic astronomy is a truly multi-wavelength enterprise, so astrophysicists at CAS use a multitude of ground-based and space-based facilities across the entire electro-magnetic range. For example, using the Chandra X-ray Observatory to obtain some of the deepest images of the X-ray sky ever made, University Professor and Nobel Laureate Riccardo Giacconi and Prof. Colin Norman showed that the diffuse X-ray background is in fact composed out of a large number of accreting supermassive black holes in galaxy centers. In the paragraphs below we highlight a small subsample of other recent results from our extragalactic astronomy groups. 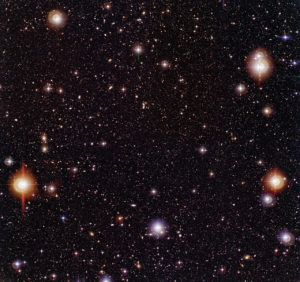 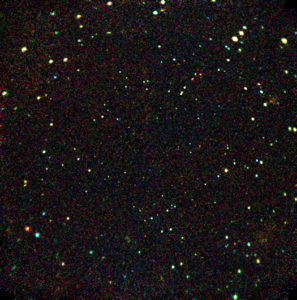 How and why galaxies undergo dramatic bursts of star-formation, and the impact of these events on the overall evolution of galaxies is an area of rapid advance, one in which Prof. Timothy Heckman has been especially prominent. This is one of the many problems in astrophysics for which the truly multi-wavelength approach favored by many CAS astronomers is critical. 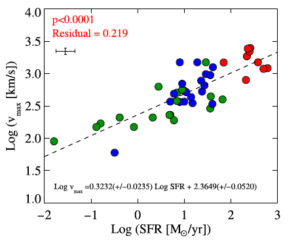 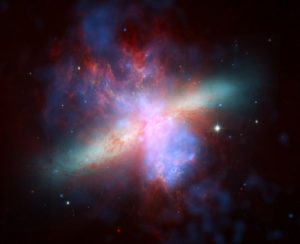 Essentially all chemical elements heavier than hydrogen and helium are made in the interiors of stars and then are ejected into the interstellar medium during stellar explosions. The build-up of elemental abundances, or “metallicity”, is a major research topic in extragalactic astronomy and galaxy formation. JHU postdoctoral researcher Dr. Barrera-Ballesteros, Hubble Fellow at JHU Dr. Guangtun Zhu, Prof. Heckman and Prof. Zakamska are using the data from SDSS-IV to study and model the relationship between metallicity and other parameters of the galaxies. This research is made possible by the JHU’s participation in MaNGA — Mapping Nearby Galaxies at APO — which uses the cutting-edge technique of integral-field spectroscopy to obtain spectroscopic maps of 10,000 nearby galaxies.

Figure caption:  Relation of the oxygen abundance and the stellar mass density for more than 500,000 individual star-forming regions (spaxels) located in hundreds of disk galaxies. The discovery that the gas metallicity is primarily determined by the local galaxy parameters in the same area of the galaxy is quite puzzling, as this means that the transport of heavy elements (or as they are called in astrophysics, “metals”) does not occur very effectively between different parts of the same galaxy (from a paper led by Dr. Barrera-Ballesteros). 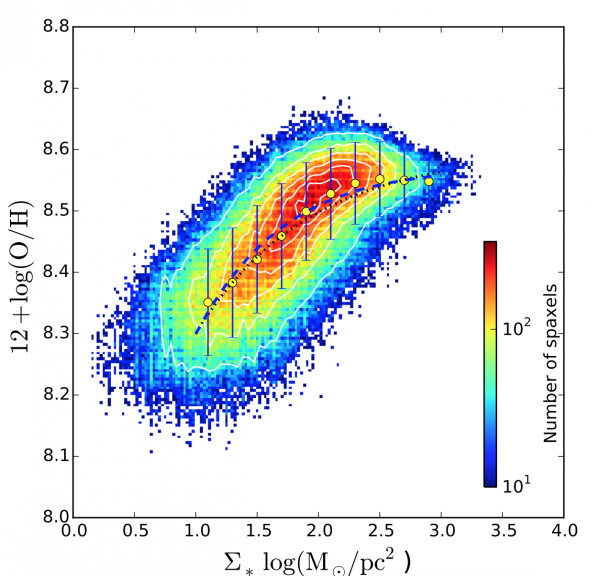 Prof. Nadia Zakamska leads a multi-wavelength effort to discover quasars — actively accreting supermassive black holes — in nearby and distant universe, including finding a large population of elusive obscured quasars, where the powerful emission of the material accreting onto the black hole is blocked from the observer by circumnuclear clouds of dust and gas. Recent highlights from her research group include the discovery of galaxy-wide winds launched by accreting black holes — quasars — which may limit the maximal mass of galaxies.

Figure caption: The search for the signposts of quasar-driven winds is a multi-wavelength endeavor. Graduate student Rachael Alexandroff who is working with Prof. Zakamska is leading radio observations obtained with the Very Large Array to search for signatures of shocks produced as the quasar-driven winds slam into the interstellar medium of the host galaxy. In the left panel, the radio emission of a radio-quiet quasar is clearly spatially extended on scales of a few kpc. In the right panel, the velocity profile of the ionized gas demonstrates a broad component — an outflow signature.

The SDSS-IV MaNGA survey mentioned above is a powerful tool for studying physical processes in nearby galaxies, including the cycle of feeding of and feedback from their central supermassive black holes. Postdoctoral researcher and Provost’s Fellow Dr. Dominika Wylezalek in collaboration with Prof. Zakamska has “zoomed into” the central parts of MaNGA galaxies with higher-resolution observations from the Gemini telescope to discover previously unseen winds driven by the activity near their central supermassive black holes.

Figure caption: MaNGA (upper row) and Gemini (lower row) observations of a galaxy hosting an active nucleus — a supermassive black hole which is accreting surrounding matter, which in turn produces copious radiation during its final plunge. Blue color signifies that the material is moving toward the observer, whereas red regions are moving away. The characteristic red/blue pattern seen in top left is due to the rotation of the galaxy disk. Residuals in the velocity field as measured by Gemini reveal a hidden, small scale outflow driven by the supermassive black holes, where none was visible at MaNGA resolution. Dr. Wylezalek is leading multiple programs to discover and characterize such objects. 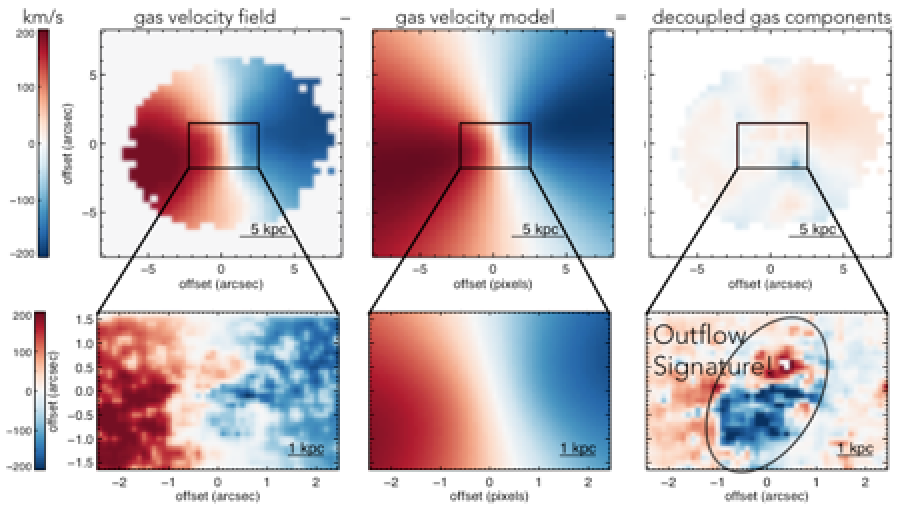 Figure caption: Discovery of hot, overpressured quasar winds by Crichton et a via the Sunyaev-Zel’dovich Effect. The characteristic signature of the SZ effect is the lack of sub-millimeter emission at low frequency (dark spot in the center of the top left panel) and enhanced sub-millimeter emission at high frequency (bright spot in the top right panel). 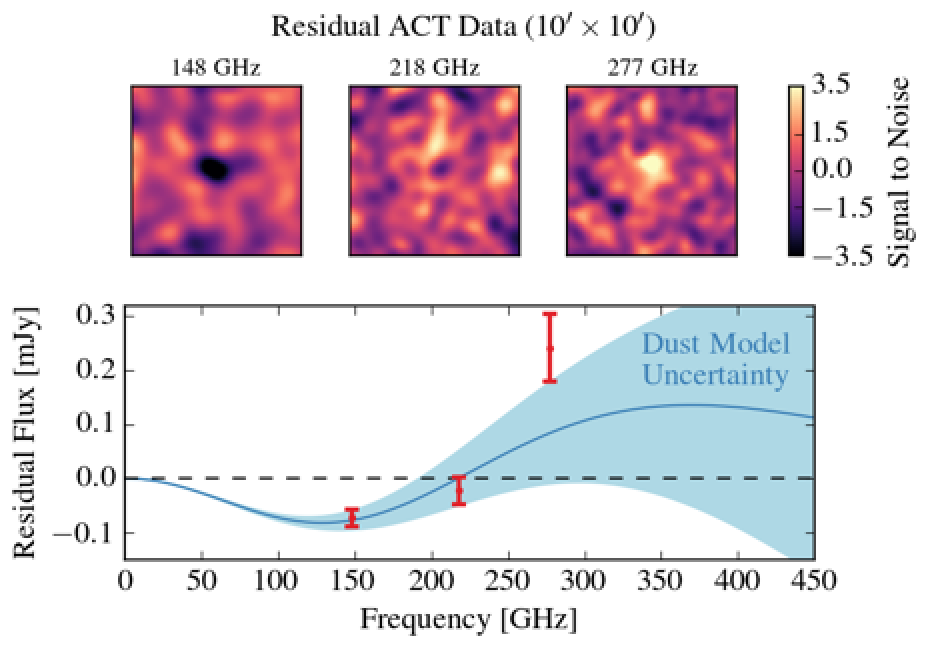 A fascinating new way of studying supermassive black holes in centers of galaxies is through so-called tidal disruption events, which occur when an unsuspecting normal star accidentally passes too close to the black hole and is shredded by  its strong tidal forces. Prof. Julian Krolik studies this process theoretically, using complex numerical simulations which incorporate equations of Einstein’s General Relativity (necessary to describe gravity near the black hole) and the magnetic fields and gas-dynamical effects within the resulting debris streams. Hubble Fellow at JHU Dr. Van Velzen leads a cutting-edge observational program to discover and characterize these events in observations.

Figure caption: Tidal disruption effects are preferentially found in so-called post-starburst galaxies, such as NGC 3156 shown in the left panel, where central stellar overdensities and perturbations of the potential may be most conducive to supplying stars to the central supermassive black hole. In the panel on the right, a tidal disruption event is shown brightening and fading at optical and infrared wavelengths — the latter seen for the first time by a Hubble Fellow at JHU Dr. Van Velzen who studied it with JHU collaborators Dr. Alexander Mendez and Prof. Julian Krolik 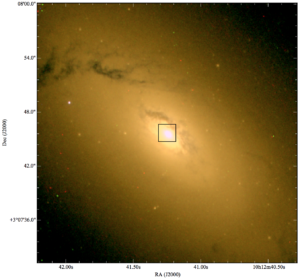 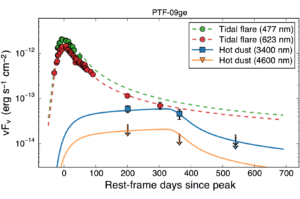