Junellie Gonzalez Quiles, B.S. of Astronomy from University of Maryland, now research assistant at NASA Goddard Space Flight Center, was awarded by the Society for Advancement of Chicanos/Hispanics and Native Americans in Science (SACNAS) for her work in Wicks lab. Junellie was one of two students in the geosciences awarded for her undergraduate research and poster presentation at the three day SACNAS National Diversity in STEM Conference in Honolulu, HI held from October 31st to November 2nd. Click here for the SACNAS press release.

Junellie worked with Zixuan Ye, Dr. Raymond Smith, Dr. Marius Millot, and Prof. June Wicks to reconstruct the pressure and temperatures achieved in laser-compressed magnesium oxide (MgO). Since MgO is thought to be a major component of mantles of rocky planets larger than Earth, the experiments were run in order to probe possible polymorphs of MgO crystals at pressures greater than 500 GPa. The MgO crystals in [111] orientation were compressed using laser-induced decaying shock waves moving through the sample at the OMEGA-EP laser facility at the Laboratory for Laser Energetics in Rochester, NY. The experiments were run in January of 2018. Over the next year while attending school at the University of Maryland, College Park, Junellie analyzed the pyrometry data and extracted reflectivity from the velocimetry data, creating a python script to extract photon counts and calibrate the time base. Combining this photon measurement and principles of grey body emission, the shock front temperature was calculated. She used velocity interferometry measurements to determine the particle velocity in the sample, and using the Rankine-Hugoniot equations, constrain the pressures achieved in these experiments.

This work is being written up for publication, stay tuned! Future work out of the Wicks lab will learn more about the MgO phase transitions observed at these high pressures, including analysis of experiments involving other crystal orientations.

Congratulations to Junellie for her hard work and her award at this year’s SACNAS conference. She is now at NASA Goddard Space Flight Center as a research assistant working on exoplanet scene simulations, to model what observers may expect when using NASA’s upcoming Wide Field Infrared Survey Telescope (WFIRST). For graduate school, she hopes to bridge the gap between geoscience experiments and observations of exoplanet atmospheres in order to better characterize these rocky exoplanets. 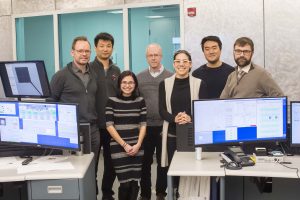 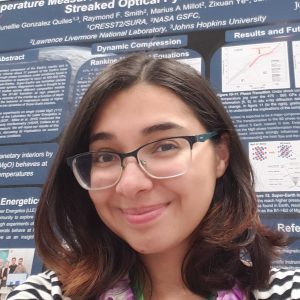 Junellie Gonzalez Quiles in front of her poster, entitled “Temperature Measurements of the MgO [111] Hugoniot using Streaked Optical Pyrometry”, at the 2019 SACNAS conference in Honolulu, HI.