The term “polar vortex” has become part of the everyday vocabulary after the widespread media coverage of the extreme cold events over the USA during the early winter of 2014. However, there is some confusion regarding what polar vortices are and how they are related to various weather events. Adam Sobel, Lorenzo Polvani, and I have written an essay to Bulletin of the American Meteorological Society clarifying what is meant by polar vortices in the atmospheric science literature and the connections with extreme weather events at the earth’s surface. The key points from this essay are below.

In the atmospheric science literature, the term “polar vortex” is most commonly used as an abbreviation for “circumpolar vortex”, and refers to a planetary-scale flow that encircles the pole in middle or high latitudes. There are polar vortices in Earth’s atmosphere as well the atmospheres of other planetary bodies. Although Earth’s polar vortices are sometimes described as extending from the middle troposphere to the upper stratosphere, there are distinct tropospheric and stratospheric vortices, as illustrated schematically below. 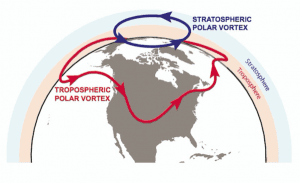 The existence distinct tropospheric and stratospheric vortices can be easily seen in plots of the climatological zonal-mean zonal winds shown below. The latitude at which the zonal wind reaches its hemispheric maximum can be considered as marking the approximate edge of a polar vortex, and there is a clear vertical discontinuity in this latitude around 100 hPa, It is also clear that the vortex in the troposphere is much larger than the vortex in the stratosphere, and that the two are not directly connected. Furthermore, while the tropospheric vortex exists all year, the stratospheric polar vortex exists only from fall to spring. 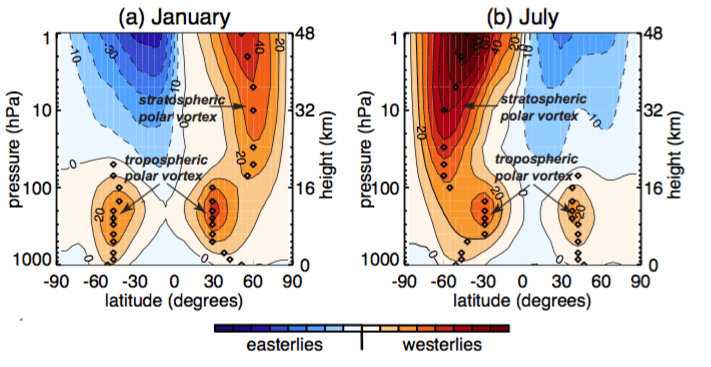 Both the tropospheric and stratospheric polar vortices are basic features of the earth’s climatology. There existence is neither unusual nor a manifestation of major changes in the global atmospheric circulation.

The strong circumpolar westerlies that define the stratospheric polar vortex maximize at around 60o latitude, from just above the tropopause (~100 hPa) into the mesosphere (above 1 hPa)  (see plot of zonal winds above). The stratospheric polar vortex forms in fall when there is no solar heating in polar regions (and large-scale meridional temperature gradients), strengthens during winter, and then breaks down (and high latitude winds become weak easterlies) as sunlight returns to the polar regions in spring.

The larger topographic and land-sea contrasts in the NH generate stronger upward propagating waves than in the SH, causing the Northern stratospheric vortex to be weaker and more distorted than its Southern counterpart.  This has major implications for stratospheric ozone depletion: An ozone hole forms over Antarctica and not over the Arctic as the SH polar vortex is colder and air within it more isolated than the NH vortex.

The dynamics of the polar vortices is best examined using potential vorticity (PV). The vortex is defined by the region of high PV, and maps of PV show the structure and evolution of the vortex. E.g., in this animation the blue areas have high absolute value of PV and identify the Antarctic polar vortex  (Courtesy of Sean Winkler‘s web site; click for animation).

The vortex can also be seen in maps of trace constituents, e.g.,  CRISTA measurements of nitrous oxide mixing ratios at a pressure-altitude of 10 hPa (about 30 km).

Further illustrations of the Antarctic polar vortices can be seen in images of column-integrated ozone. The image below contrasts the ozone hole between September 2001 and 2002. The 2001 situation is the normal conditions, whereas 2002 shows the rare occurrence of a sudden warming when large scale wave activity split the polar vortex, and ozone hole, into two sections. 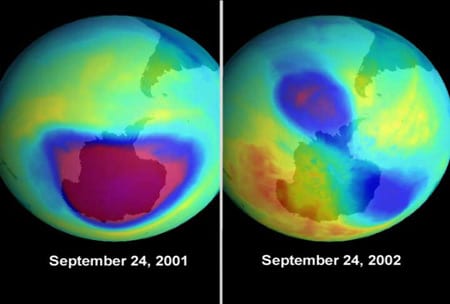 The edge of the tropospheric polar vortex is traditionally defined as specified geopotential contours, on the 300 or 500 hPa pressure levels, that typically lie within the core of the westerlies. The values of the contours chosen vary, but the tropospheric vortex edge generally lies between 40-50 degrees latitude (see bold contour in left panel below). On monthly or longer time scales Northern Hemisphere tropospheric vortex generally has two centers, one near Baffin Island and the other over northeast Siberia (left panel below). Analogous circumpolar asymmetry is not usually observed in the climatological Southern Hemisphere vortex.   The tropospheric vortex can (as in the stratosphere) be defined from potential vorticity contours on an isentropic surface. The 300-500 hPa geopotential height contours used to define the vortex are similar to the intersection of the PV = 2 or 3 PVU surface – commonly used to define the dynamical tropopause in the extratropics – with the 320 or 330K isentropic surfaces (right below).

On daily time scales the tropospheric vortex may have several centers, and may be distorted by “synoptic-scale” Rossby waves that propagate along the vortex edge, see figure and discussion in the next section.

The image below is for the cold air event over the eastern USA in early January 2014, which brought the term “polar vortex” into the general public’s vocabulary. That event was the result of a large-amplitude ridge-trough system over the USA, with the trough bringing extremely cold air south over the eastern USA on 6 January (“T” in above plots).  Although often attributed to the movement of the whole polar vortex, this event cannot be directly attributed to changes in the stratospheric vortex, or even to hemispheric changes to the tropospheric vortex. However, it may be appropriate to describe it in terms of waves on the edge of the tropospheric vortex, and the deformation of part of that vortex  (or “a lobe”) over the eastern US on 6 January, as shown in image below. 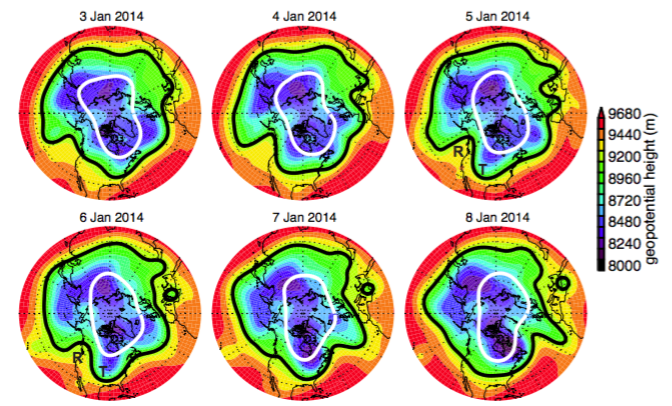 The description of a polar vortex has varied in the American Meteorological Society Glossary of Meteorology. The original 1959 version refers only to a vortex in the middle and upper troposphere, while the 2000 and 2014 versions refer to a vortex extending from the middle troposphere to the stratosphere. The current (2015) version correctly describes distinct tropospheric and stratospheric circumpolar vortices.

Polar vortices are not unique to Earth’s atmosphere. There are polar vortices in the atmospheres of many planetary bodies including Mars, Venus, Saturn, and Saturn’s moon Titan. I have done some research examining the Martian polar vortices. 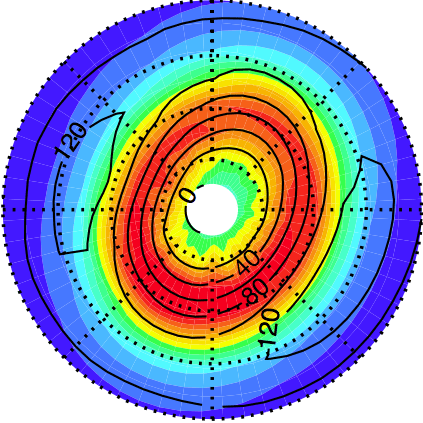