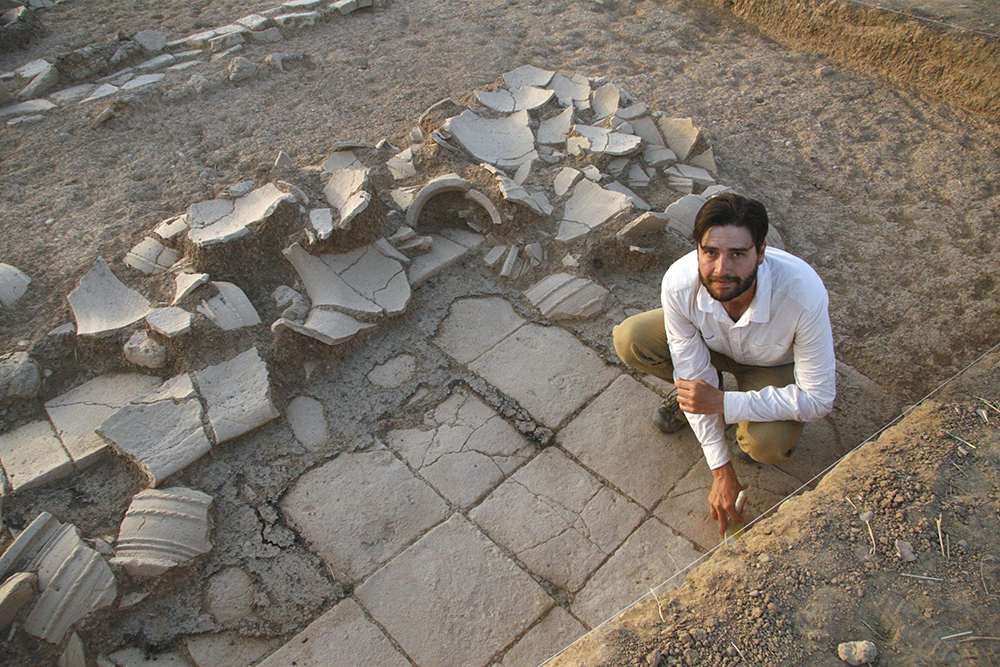 A long trench 19 x 4 meters was excavated south of the Middle Bronze Age enclosure wall identified on the north slope of the high mound in 2017.

Two Late Bronze phases were characterized by clusters of baked bricks, grinding stones, and large potsherds.  A food preparation area with grinding stones, pestles, mortars, and pottery was also exposed, as was an adult pit burial with a painted Younger Khabur Ware goblet and other objects. Another burial (albeit without bones) included a bronze dagger with a cast hilt and a collection of beads.

Below the LB remains, the Middle Bronze Age large building identified in 2017 was further excavated and its floors reached.   The mudbrick walls were preserved as high as 1.5 meters, and its floors were partly composed of baked bricks and partly of mud plaster with reed matting overlain. Although segments of burned roofing material were found throughout the building suggesting a conflagration, very little artifactual material was in situ on the floors.   A curious aspect of the debris filling the westernmost room were numerous fallen baked bricks with bitumen mortar. Whether they fell from a second floor or from an adjacent building was not determined.

To continue the investigation of well-preserved Late Bronze Age remains on the high mound, a 10 x 6 meter trench was excavated south of trenches excavated in 2013-2014 on the High Mound East.  Four LB phases were identified.  In phase 1, directly below the surface, was a square baked brick platform with lime-plastered drain, adjacent to a lime- and bitumen-plastered circular basin that contained ashy burned debris.  Clearly industrial in nature, it remains to be determined what was being manufactured.

Phases 2-4 had segments of mudbrick walls that had been disturbed by the phase 1 feature.  An infant burial was found inside a clay jar.  Phase 4 was the earliest LB phase.

Middle Bronze architecture was exposed in the form of a thick mudbrick wall below the LB deposit, preserved at least ca. 2 meters high with partial evidence of burning.  These results indicate the presence of a large MB building subjected to conflagration, similar to that of the High Mound North.

Three trenches were excavated in the Lower Town East, all dating to the Middle Bronze Age.

In the southern trench (10 x 10 m) were two baked brick structures.  To the west was a bitumen-coated platform associated with large storage vessels with perforated bases.  One of the vessels yielded a baked brick with the “game of 20 squares” incised on its surface.  To the east, the other baked brick feature was a sunken rectangular construction also intended for the installation of large vessels.  The geophysical results from 2022 revealed that this trench was at the edge of a large building (palace?).  The institutional storage implied here would be appropriate for such a building.

A 10 x 10 m trench to the north had relatively few features but included a baked brick platform and large jars in situ.

To the southeast, in the location of the temple identified by geophysical survey in 2017, a 10 x 10 meter trench was opened in the southern part of this building.  As elsewhere on the lower town, excavations here were complicated by the homogeneity of the soil, it being extremely difficult to distinguish mudbrick architecture from non-mudbrick soil.  Still, careful study of the stratigraphic sections revealed thick walls bounded on either side by ashy surfaces.  Zooarchaeologist Jill Weber noted that a large number of bones from this area were of very young sheep/goat, perhaps indicative of offerings of lambs to the temple deity.

Magnetometry survey was conducted in 2022 in the northern and eastern lower town and in parts of the high mound.  Most significant was the discovery of a large building in the northern lower town that might identifiable as a palace.  A surface collection in this area identified only Middle Bronze Age pottery, indicating the likely date of the building.  An interesting discovery in the surface collection was of part of a terracotta plaque showing a male figure, probably a king, wearing the typical headgear of southern Mesopotamian rulers in the Middle Bronze Age, such as Hammurabi, with a worshipping raised arm gesture.   Also found was part of a terracotta model bed.

Jill Weber conducted analysis on the animal bone remains from the 2022 season, and Alexia has embarked on archaeobotanical analysis.

The 2022 results from Kurd Qaburstan continue to illustrate the importance of the Middle Bronze occupation at the site, with a large (public?) building on the High Mound North Slope, large-scale architecture on the High Mound East, institutional storage inside a possible palace on the Lower Town East, and a temple on the southeastern part of the lower town.  In the Late Bronze Age, the reduced occupation has evidence of industrial activities, burials, and domestic activities.

We are very thankful for the support of our colleagues in the antiquities organization of the Kurdistan Regional Government, especially the Director-General Kak Kaify Mustafa Ali.  Likewise, we are very grateful to our colleagues in the Erbil Department of Antiquities, especially the Director Kak Nader Babakr, our representatives Kak Guran Muhammad Amin and Kak Gharib Ismail Bawa Murad, and our pottery supervisor Khazan Latif.  We are particularly grateful to Kak Nader Babakr for his assistance as consultant and advisor in our research.