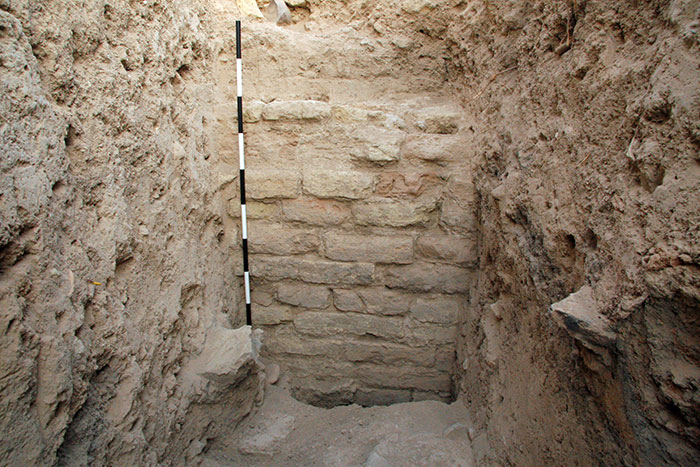 In 2013, the project aimed at (1) sampling different parts of the site to determine their character and history of occupation, in order to guide future excavation strategy, (2) testing the hypothesis that Kurd Qaburstan was a major city of the Middle Bronze period, and (3) conducting a geophysical survey to study the urban layout of the city. Seven excavation units of 6 x 10 meters were opened.

While we know of the Mittani period in the Kirkuk region from the 1920’s-1930’s excavations at ancient Nuzi (Yorgan Tepa) (Starr 1937, 1939; Maidman 2010) and from the more recent excavations at Tell el-Fakhar (al-Khalesi 1977), much more needs to be learned about this period and culture, especially in the Erbil area (MacGinnis 2013).

White masses observable on Corona satellite photographs of Kurd Qaburstan have been hypothesized to represent large-scale mudbrick architecture in the center of the lower town. To test this hypothesis, excavations were conducted in unit 5260/2846 in the central lower town. Excavations to a depth of 3 meters confirmed that significant architecture existed here, including an impressive baked brick wall preserved to 11 courses. The date of the strata excavated was middle Islamic (14/13th century AD).

A discrete white mass on the western lower town, hypothesized to be a large mudbrick building, was explored through excavations in unit 4844/2806. No architecture was identified, only occasional cobble surfaces or stone hearths, contradicting the proposed hypothesis. As in the central lower town, the date of the sampled occupations was Islamic.

Two trenches were opened at the location of the presumed city wall in order to determine its existence, character, and date. In unit 4666/3076 on the west, excavations revealed a homogeneous soil matrix without evidence of architecture; in the western, outer part of the excavated area, no artifacts were retrieved, while Middle Bronze pottery and other remains appeared in the eastern, inner part of the trench. Similar results were obtained in unit 4946/3454 in the north. We hypothesize that the outer parts of the two trenches, without evidence of artifactual material, comprise parts of the city wall, constructed either of mud or mudbricks that have merged into a single soil mass, while the inner parts consist of strata deposited against the wall. The geophysical survey results support this interpretation for unit 4946/3454.

Geophysical survey directed by Andrew Creekmore (University of Northern Colorado) included the use of magnetometry and conductivity to determine evidence of the ancient urban layout immediately beneath the mound surface. Covering ca. 12 hectares, the magnetometry survey revealed a densely occupied urban landscape enclosed by a city wall with towers at regular intervals. Given the results of surface survey, the date of this occupation is most likely Middle Bronze (Old Babylonian).

It is evident from the 2013 results that Kurd Qaburstan is, as was posited, the site of a very large Middle Bronze period walled city. In addition, significant Mittani period remains are now attested and accessible just below the surface on the high mound.