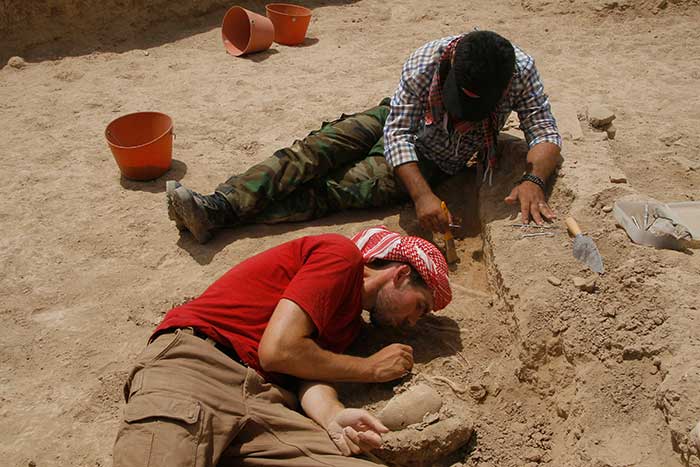 The Johns Hopkins University excavation project at Kurd Qaburstan conducted its second field season in May–June 2014. The project had three main goals, to:

Fieldwork began with a surface sherd collection designed to supplement the results of the Harvard EPAS project in 2012 (Ur et al. 2013). The results indicated that the main periods of occupation on the southern lower town were Islamic and Middle Bronze, the high mound had a range of periods from Early Bronze to Islamic, and the north/northwest lower town was dominated by Middle Bronze pottery. Therefore, Middle Bronze remains should be most accessible to excavation in the north/northwest lower town.

Four trenches were excavated in an east-west line on the high mound east and one trench on the high mound north. On the high mound east, evidence of three Mittani phases were exposed, from phase 3 (earliest) to 1 (latest). Phase 1 was represented by two pit burials, one of an adult that included two carved bone pins with fist-shaped heads, a glazed ceramic bowl, and a “Kassite goblet,” the other of a child accompanied by Younger Khabur ware pottery. In phase 2 was mudbrick architecture with drainage systems constructed of ceramic pipes and baked bricks; a Mittani Common Style cylinder seal was found in this phase, as well as evidence of the production of numerous bone tools.   Phase 3 was represented by a mudbrick building of an apparent elite character, with drainage systems equipped with ceramic drainpipes and baked brick water conduits. A square baked brick installation leading to a baked brick drain is interpreted as a bath, which was adjacent to another baked brick feature understood to be a toilet.

Since the surface collection identified the main period of occupation in the Lower Town North as Middle Bronze, a trench was opened in this area. Below an incompletely preserved Middle Bronze phase was an earlier occupation from the same period that included rooms with abundant pottery vessels lying broken in situ, indicating that the area had been abandoned without the inhabitants removing its ceramic vessel contents. Also found were clay ovens, a ceramic vat, and numerous grinding stones, demonstrating the importance of food preparation in the area. Some of the grinding stones were composed of “synthetic basalt,” ceramic slag produced to replicate basalt (Stone et al. 1998).

Surface collection had also identified a significant Middle Bronze presence on the southern slope of the high mound, where another trench was opened. Two Middle Bronze phases were exposed, the later of the two was poorly preserved but yielded a clay jar sealing with an Old Babylonian “ascending sun god” cylinder seal impression (Collon 1986). Below this was a better preserved occupation including mudbrick and baked brick architecture and drains. Like the earlier phase in the Northern Lower Town, this phase included ceramic vessels left extant in situ on the room floors.

Intrusive pit burials were abundant in this trench, most of which had few or no artifactual remains, but the grave of an adult female yielded objects that allow for a dating in the mid-first millennium BC, in the Neo-Babylonian/Achaemenid era, including stamp seals, a cylinder seal, bronze toggle pins, and a bronze fibula.

Geophysics work at Kurd Qaburstan in 2014 included magnetometry, resistance, and ground-penetrating radar survey. Magnetometry was most successful, and by the end of the season ca. 30 hectares of the site had been surveyed. These data reveal that the northwestern portion of the Middle Bronze city was densely settled, with patterns of neighborhoods and streets evident.

Jill Weber conducted analysis on the animal bone remains from the 2014 season. Her preliminary results indicate that the Mittani period occupation on the high mound was characterized by a predominance of domesticated species, especially sheep and goat, but also with a pronounced emphasis on pig. In distinct contrast, the Middle Bronze remains from the lower town had a much larger representation of wild species, especially gazelle. Archaeobotanical analysis is currently being conducted under the direction of Alexia Smith (University of Connecticut).

The results of the 2014 season of excavations at Kurd Qaburstan supply important new information on the character of this second millennium BC urban center of northern Mesopotamia.   The densely occupied nature of the Middle Bronze lower city is beginning to be documented, while a variety of buildings and features have been revealed for the Mittani period occupation on the high mound.   Neither the Middle nor Late Bronze periods has been studied extensively in the Erbil region before, so it is to be hoped that our results will fill a gap in the history of the Erbil area and in northern Mesopotamia in general.