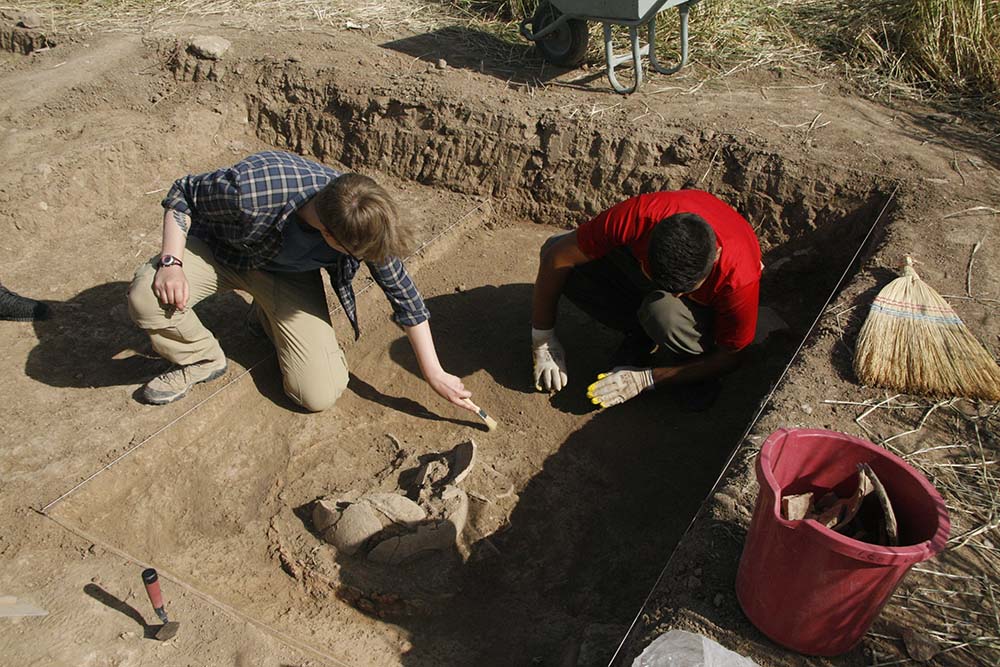 After a study season in 2016, a third excavation season at Kurd Qaburstan was conducted in April-May 2017.  Results were obtained from the Late Bronze (Mittani) and Middle Bronze occupations in different parts of the site, as detailed below.

To continue the investigation of well-preserved Late Bronze remains, a 14 x 6 meter trench was opened adjacent to 2013-2014 trenches on the high mound east.  The Late Bronze architecture was a continuation of the rooms previously excavated, including drains connecting to the bath observed to the south.  Intrusive into the architecture was a pit burial containing the body of a child under a cover of vertical mudbricks.  The child was wearing a bracelet and necklace of beads of carnelian, limestone, blue frit, shell, and other materials.

A step trench 12 x 20 meters was excavated down the slope of the northern part of the high mound.   In this area, the Late Bronze period occupation included clusters of baked brick fragments and grinding stones (“bricolage”) of uncertain function.  Particularly noteworthy was a pit burial containing the disarticulated bones of a human adult and child, as well as sheep/goat bones and a small jar.  Found with the human bones were four baked clay human statuettes or figurines.  One of these, with female sexual characteristics, had bronze toggle pins criss-crossed on the torso.  Whether these figures represent the individuals buried in the grave or have another significance remains to be investigated.  Also notable was a ceramic gaming board for the game of 58 holes.

Below the LB was thick-walled and well-preserved architecture dating to the Middle Bronze period.  This includes an apparent segment of a fortified enclosure wall for the high mound and a large-scale building constructed against it.  Evidence of burning was revealed, including burned segments of ceiling collapse.  The walls were preserved relatively high, so that the floors were not reached in 2017.

Two Middle Bronze phases were recognized in this trench, the earlier of which had residential architecture.  Of particular interest was the frequency of grinding stones and other large objects composed of “synthetic basalt,” i.e. ceramic slag produced to replicate basalt, first identified in southern Mesopotamia by Elizabeth Stone at Mashkan-shapir.

On the lower town, the north area was sampled in two trenches.  One was adjacent to the 2014 excavations, revealing two Middle Bronze phases, both of which appeared to belong to a large plaza or courtyard.  An oven in the earlier phase yielded a collection of vessels, including a stamped and impressed “grain measure” beaker.

The second trench was in a location where geophysical results had indicated the presence of a large building near the city wall.  Four MB phases were documented, including a phase with complete vessels and a baked brick threshold, from which the clay figurine of a pig was recovered.  In this part of the lower town, the soil is homogeneous, and it is not possible to see mudbrick walls.  The earliest MB phase was above virgin soil, about 3 meters below the mound surface.  At least in this part of the lower town, the earliest occupation dates to the Middle Bronze Age.

Magnetometry survey discovered a monumental temple in this area.  Two small trenches were initiated and confirmed the Middle Bronze date of the building.  Among the finds was a fragmentary female figurine.

Magnetometry survey was conducted in 2017 in the eastern lower town, with ca. 15 hectares recorded.  Evidence of the Middle Bronze city wall was detected, with towers at regular intervals, as well as small-scale architecture, streets, and other features.  Of particular interest was the discovery of a large building with two large square courtyards and small rooms arranged around them near the city wall, identifiable as a monumental temple comparable to those from Middle Bronze Tell al Rimah and Assur.

The 2017 results allow us to tentatively date the foundation of the lower town to the Middle Bronze period.  If this is correct, the site achieved its maximum 95 hectares in this period.  Evidence of major Middle Bronze occupation on the high mound is also documented, including fortifications and substantial adjacent architecture.  Part of this emerging picture of monumentality is the presence of a large temple on the eastern lower town.  With respect to the Late Bronze occupation, which mainly was restricted to the high mound, new varieties of architecture and burial data have been retrieved.  Ceramic and radiocarbon analyses indicate that the occupation dated to early in the LB period, perhaps prior to the period of Mittani control in the region.