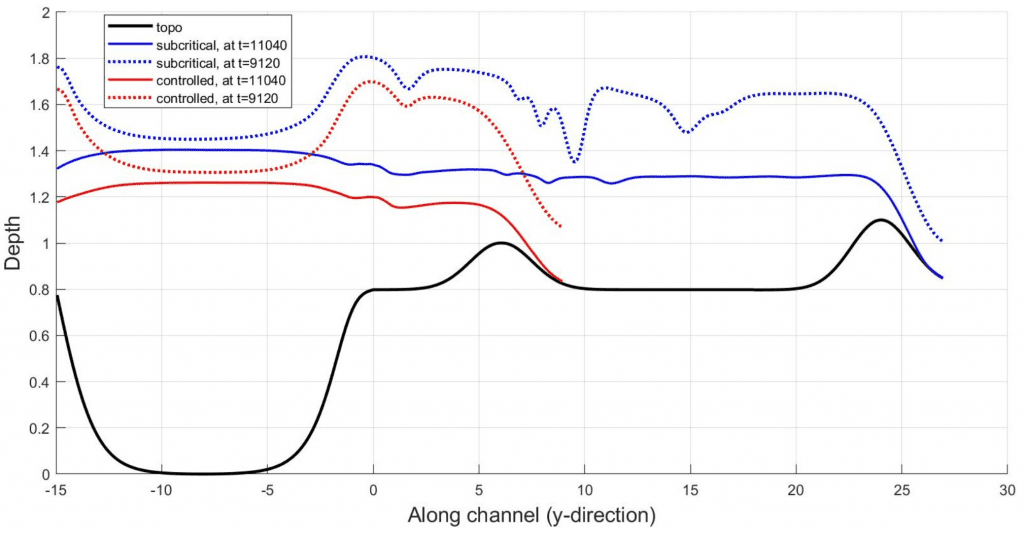 Here’s her Thesis Abstract: An important mechanism in redistribution of heat and salt in the ocean is known as global meridional overturning circulation. Oceanic overflows contribute to the deep branches of the conveyor belt. Determining overflow dynamics and kinematics is critical to estimating the changes in overflow production and composition as it ultimately impacts global ocean circulation. In this work, we first present the kinematics of a specific sea-strait, and then study some aspects of overflow dynamics. We study the overflow of dense water from Denmark Strait (known as Denmark Strait Overflow, DSO) which feeds the lower limb of the conveyor belt in the northern extremity of the Atlantic Ocean. We investigate the upstream pathways of the DSO through the application of backward Lagrangian particle tracking in a realistic ocean model. The Lagrangian analysis confirms the existence of previously known branches from the North, and it also reveals an additional pathway emerging from south of Iceland. The southern pathways supply over 25% of the DSO during winter of 2008 when the North Atlantic Oscillation (NAO) index was positive and can potentially change depending on the phase of the NAO. The southern pathways mark a more direct route from the near-surface subpolar North Atlantic to the NADW. The second part of this study involves the dynamics of overflow pathway partitioning and the effect of upstream reservoir on overflow production for an idealized sea-strait geometry with a continuously varying (parabolic) cross-section. We use rotating hydraulic theory and idealized modeling to reveal the relation between reservoir conditions, strait geometry, and overflow transport. The results reveal that the basin circulation intrudes more into the channel for a wide parabola with low curvature than a narrow parabola causing large variations in the interface height near the channel. Far enough from the channel entrance, the hydraulically controlled flow in the strait is nearly independent of the basin circulation regardless of the parabolic curvature. Comparing the model to theory, we find that the measurement of the wetted edges of the flow at the critical section can be used for prediction of the volume flux. Based on this finding, we suggest three monitoring strategies for transport estimation and compare the estimates with the observed values at the Faroe Bank Channel. The results show that the estimated transports are within the range of observed values. The third part of this work is about the effect of hydraulic control on the variability in transport observed in some sea-straits on timescales such as the seasonal cycle. We force our numerical model with periodic inflow in the upstream basin for subcritical and hydraulically controlled flow to see the effect of hydraulic control on the suppression of time variability. Results reveal that although the narrowing and shallowing of topography lead to a local suppression of time dependence, the reduction of the amplitude at the sill is stronger for the hydraulically controlled flow, regardless of the forcing frequency and amplitude.