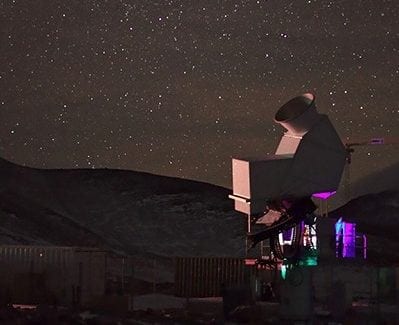 Characterizing the origin of the universe:

According to Inflation Theory, the universe grew exponentially from quantum fluctuations to astronomical scales, producing gravitational waves. The primary goal of CLASS is to detect and characterize the polarization pattern (“B-modes”) that we expect the inflationary gravitational waves to imprint on the CMB. CLASS is unique because it aims to measure B-modes not only over the full range of angular scales affected by these primordial waves but also over a range of wavelengths (1.4 – 7 mm). This, in turn, allows CLASS to distinguish the primordial B-modes from local polarized emission from our galaxy.

When the universe was less than one-tenth of its current age, stars in the first galaxies formed. They emitted light that ionized the intergalactic gas during an epoch called reionization. This ionized gas adds further polarization to the CMB. By measuring this polarization, CLASS can determine when galaxies first lit up.

Constraining the mass of neutrinos:

Neutrinos are among the lightest and most elusive particles in nature. Even in the 21st century, the scientific community is still mystified by how a neutrino is able to have mass. Looking at neutrinos in context of the standard model of particle physics, a neutrino does not couple to the Higgs Field (and consequently the Higgs Boson) in the same way that other particles like electrons and quarks do. This creates an inconsistency: If a neutrino cannot couple to the Higgs Field, it cannot have mass; If it has mass and couples to the Higgs Field, a neutrino cannot exist. Precisely measuring the mass of neutrinos, therefore, is an exciting frontier of modern-day physics. Like the CMB, a cosmic neutrino background pervades space as a relic of the early universe and affects the growth of cosmic large-scale structure (LSS).  The CLASS result on reionization, together with CMB intensity data, constrains the primordial density fluctuations from which the LSS grew. Comparing these primordial seeds of LSS to measurements of the LSS itself provides powerful insights into the neutrino (specifically its mass).

Searching for new particles and interactions in ancient light:

The CMB travels to us over 13.77 billion years from the edge of the observable universe. During this long journey, subtle and previously undetected processes can alter the CMB’s polarization in measurable ways. Grand Unified Theories predict the generation of new forms of energy (quantum fields) in the early universe that could interact with the CMB (e.g., by a Chern-Simons mechanism) to rotate its linear polarization, an effect that CLASS is well suited to measure. In this way, CLASS searches for new fundamental interactions and pushes the boundaries of physical theory.

Measurements of the CMB intensity have led to claims of cosmic anomalies at large angular scales. Whether these claims result from statistical flukes or point the way to new physics beyond current theories can be determined by checking whether the purported intensity anomalies have associated polarization anomalies at large angular scales. The CLASS polarization measurement is uniquely positioned to answer this exciting question.

The CLASS survey will also improve our understanding of our Milky Way. The proposed survey images 70 percent of the sky, an area including much of the Milky Way and the nearby Magellanic Clouds.

The CLASS data will be made publicly available. Because it covers nearly the entire sky, the CLASS data will combine with other astronomical surveys to extend the scientific impact beyond our project’s substantial intrinsic benefits.