Located east of Aleppo, a dominant urban center of northern Syria since Bronze Age times, the Jabbul plain controls an important east-west route linking Aleppo and the Mediterranean with Mesopotamia. Most of the plain receives enough precipitation for dry farming, but annual rainfall decreases from west to east, resulting in a dry, agriculturally marginal region in the eastern fringes of the Jabbul. Historically, this eastern zone is utilized by nomadic pastoralists tending herds of sheep and goat.

Umm el-Marra, a relatively low mound (maximum height ca. 8-9 m), is the largest Bronze Age tell in the Jabbul (ca. 20 hectare walled settlement plus possible 5 hectare extension to north) and was probably a regional administrative and economic center. Ringed by fortifications, the tell also includes an “acropolis” ca. 150 x 150 meters located in the south center. Excavations at the site were first initiated by a Belgian team directed by Roland Tefnin in the late 1970’s and early 1980’s. In 1979, an article published by Paolo Matthiae, excavator of Ebla, proposed that Umm el-Marra should be identified with ancient Tuba, a town mentioned in the Ebla archives (ca. 24th century BC) that later served as the capital of a small polity in the Yamhad kingdom (ca. 1800-1600 BC) (cf. texts from Ebla, Alalakh VII, Mari, Karnak and Boghazköy). This suggestion still seems plausible but is yet to be proven. 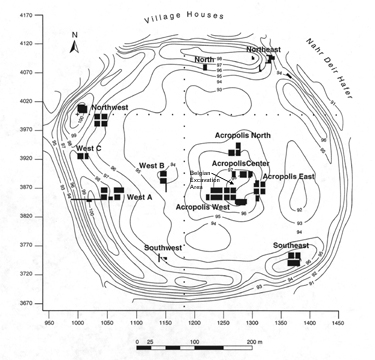 Roughly equidistant between Aleppo and the Euphrates, Umm el-Marra probably served as a major control point along the east-west road. The site’s location near the edge of the rainfall farming zone also implies its function as a “gateway city” between the pastoralist zone of the eastern dry steppe and the western agricultural zone. Its relatively modest size with respect to other Bronze Age Syrian urban centers may be attributable to the limited agricultural resources of its vicinity and/or the predominance of Aleppo as an administrative and economic center.

A survey of the central and eastern Jabbul plain surrounding Umm el-Marra conducted in 1996 has added a regional component to the project. The results provide a document of the history of the region from the ceramic Neolithic period (ca. 6000 BC) onwards. In addition, an ongoing project of regional cultural resource management has been conducted in conjunction with the Directorate-General of Antiquities in Syria.