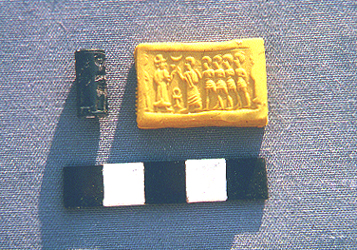 Major change occurs in Middle Bronze II, probably at the same time that the powerful Yamhad kingdom based at Aleppo makes its appearance. At Umm el-Marra, excavations revealed an energetic program of public works including new earth and cobble ramparts encircling the site and evidence of a mudbrick city wall on top. Inside the city wall, a hematite cylinder seal of a style associated with the Yamkhad royal court was discovered. In addition, the site acropolis was enclosed with a 2-meter thick wall whose northern gateway was excavated in 1999. Within the zone demarcated by the enclosure wall, an enigmatic large circular stone construction designated Monument 1 was built above the area of the Early Bronze Age elite tombs, perhaps a ceremonial platform.

In the Northwest Area, architecture dating to late MB II was exposed, either a single large complex or individual houses built against the city wall.

In addition to public architecture, samples of houses were also obtained in the Acropolis West, North and East areas.

Significant change in the faunal patterns occurs in MB II, with a remarkable increase in equids that Jill Weber interprets as a focus on the hunting of onagers, the wild asses of the steppe. Also significant is the ritual significance of donkeys, observable through donkey bones and complete skeletons interred in house foundations. An association of the ritual importance of the donkey with the newly-powerful Amorite ethnic group has been suggested, given the evidence of the Mari texts and the donkey burials of Middle Bronze Palestine.