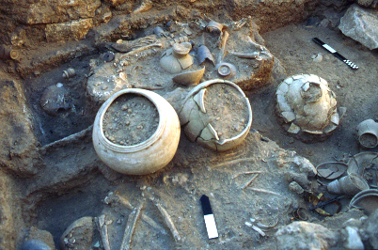 Evidence from two soundings to virgin soil in the Acropolis North and Acropolis East indicates that Umm el-Marra was founded ca. 2700 BC, in the earlier part of the Early Bronze Age (Umm el-Marra Period VI). This date is suggested via ceramic parallels to earlier third millennium BC occupations at Tell Sweyhat and Amuq G-H. The site provides a ceramic sequence for the mid-to-late Early Bronze period, with later periods V and IV corresponding to Mardikh IIB1 and IIB2 (Early Bronze IVA and IVB), along with numerous parallels to the Euphrates ceramic region.

An earthen rampart was detected in the City Wall trench in West Area A, suggesting that Umm el-Marra was already a large, fortified center in the Early Bronze Age. In the Acropolis East, West, and North and in West Area A, Early Bronze period remains included sequences of domestic architecture as well as a pottery kiln and evidence of metallurgical production like crucibles and installations. Regional analysis has shown that settlement in the surrounding plain proliferated at the same time as Umm el-Marra’s third-millennium emergence.

In 2000, the Acropolis Center excavations furnished remarkable data relevant to the elite presiding over the community during this period. In trench 1278/3900, an intact high-status (“royal”?) burial designated Tomb 1 dating to ca. 2300 BC was excavated. A rectangular building (2.6 x 3.8 meters) of mudbrick above stone, the tomb contained three layers of skeletons inside wooden coffins. In the top layer were two young women side by side, each with a baby at the knee, accompanied by rich furnishings. One woman had jewelry including a gold diadem, bracelet, and pendants and silver toggle pins and bracelets. Accompanying the other woman were lapis lazuli amulets, a large gold flanged bead, a gold filigreed pendant, two large silver lozenges, a silver disk, two toggle pins (one gold, one silver), and numerous other objects. By her head was a cup with shells containing cosmetic material.

In contrast, the layer below contained two adult males with relatively few objects, with the remains of a baby off to one side. One had a silver headband and bracelet, the other a bronze dagger and spearhead. In the third and lowest layer was one adult (sex ambiguous) associated with a silver cup and silver pins. Because the pottery in the tomb compares with that found in Ebla palace G, the tomb can be dated to ca. 2300 BC. Outside, against the tomb wall, was a jar with the remains of a baby, as well as two equid skulls and other pottery.

The tomb was evidently freestanding and built in a central, high, location. Thus, it appears to be part of the remarkable phenomenon of aboveground elite tombs built in western Syria and the Euphrates valley in the mid-late EB period, including the tumulus-covered tomb at Jerablus Tahtani, the “hypogeum” at Ahmar, and the brick mortuary complex at Bi‘a. While the latter tombs are architecturally more impressive than Umm el-Marra Tomb 1, they were substantially plundered, in contrast to the intact character of the Umm el-Marra tomb.

The singular nature of Umm el-Marra Tomb 1, with all its contents intact, has raised numerous questions. If the top two layers of bodies were interred simultaneously, which seems to have been the case, why did all six individuals die at the same time? Why are the women accompanied with rich ornaments while the men are modestly outfitted? Why is each woman accompanied by a baby? Very tentative explanations for some of these patterns could include: (1) Gold and lapis jewelry was gender-specific, with women more likely to have such ornaments than men; (2) Elite women were accompanied by sacrificed lower ranking males; (3) The interred individuals were victims of an epidemic; (4) The interred individuals were victims of factional conflict among the local elite.

In the 2002 and 2004 seasons, further excavation in the Acropolis Center revealed that Tomb 1 was part of a larger complex with at least five additional tombs. Judging from the pottery and other associated finds, the tombs were used in sequence over a period of about three centuries, ca. 2500 to 2200 BC. Some tombs like Tombs 4 and 6 contained abundant materials in situ, while others like Tombs 3 and 5 had been seriously disturbed and contained almost no non-ceramic objects. The elite character of the finds in Tombs 4 and 6, including ornaments of gold, silver, and lapis lazuli, is consistent with that of Tomb 1 and implies that the complex was associated with high-ranking members of the community and may have even functioned as a “royal” cemetery. We hypothesize that the presence of this necropolis on a high point in the center of the community was connected with the practice of elite ancestor veneration in this period, as mentioned in the texts from Ebla.

In addition to the tombs themselves were brick installations containing the skeletons of animals, primarily equids. In some cases, the skulls of the equids had been removed and placed in a separate part of the installation. Bones of human infants were also sometimes found. Apparently these installations represent the remains of animals (and human infants?) sacrificed as part of the ceremonies honoring the individuals buried in the adjacent tombs. These results provide new information on elite mortuary ideology in the third millennium BC and the symbolic importance of equids in Syrian society.

Jill Weber’s work with the equid bones has led to the suggestion that these animals were hybrids – a cross between donkeys and onagers, and likely to be the much-prized kunga equids (anše-BAR.AN) referred to in third millennium BC written records.