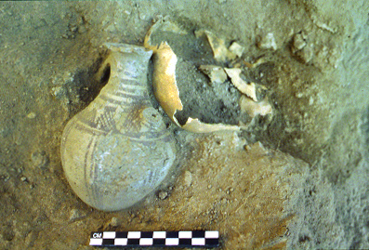 In the late 3rd and early 2nd millennium BC, many Syrian cities suffered a reduction in their size or were abandoned altogether. Debate over the nature of this “collapse” and the reasons for it is vigorous and ongoing. At Umm el-Marra, urban troubles are attested by an abandonment of the Acropolis East and other locations in the Middle Bronze I period (ca. 2000-1800 BC) and by desertion of numerous settlements in the Umm el-Marra vicinity, as attested by survey results. However, evidence of MB I occupation, while small-scale, was noted in the Acropolis West and North, revealing a variable pattern of abandonment and reoccupation of the site after the “crash” of the late 3rd millennium.

To explain why collapse occurred, explanations focusing on climatic catastrophe (Courty and Weiss 1997) and human-induced environmental degradation (Wilkinson 1997) have been tested. Thus far, no evidence of climatic change has been ascertained from botanical or faunal data at Umm el-Marra, but our planned program of pollen coring in the Jabbul salt lake south of the site has not yet produced satisfactory results. If Wilkinson’s model of agricultural intensification and consequent environmental degradation applies, there should be evidence of agricultural and/or pastoral maximization as well as environmental deterioration in EB. Archaeobotanical analyses by Naomi Miller noted only modest evidence of deforestation in EB, in contrast to stronger indications in MB and LB. Analysis of archaeobotanical and faunal samples is still underway and should continue to add significantly to our interpretations.

Despite the changes of the period, data from animal bones and plant materials at Umm el-Marra reveal a pattern of economic continuity from Early Bronze to Middle Bronze I. Such economic continuities from EB to MB I may have been instrumental in the revival of cities and states in the succeeding phase.