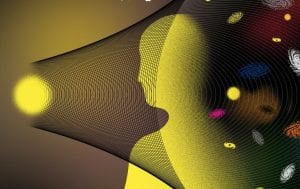 Here are brief descriptions of some recent/current research directions.  A more complete overview, as well as more details, can be found by browsing my recent publications.  A summary of highlights of previous research can be found PDF Document: here.

Gravitational waves, black holes, and dark matter.  Following the discovery of gravitational waves from the merger of two ~30-solar-mass black holes, my colleagues and I speculated that primordial black holes might make up the dark matter.  We showed that in this case, these black holes would merge at roughly the rate inferred from LIGO’s initial detection.  Since then, we and others have been busy investigating various implications of the scenario, making connections with future gravitational-wave measurements, galaxy dynamics, the CMB, the early Universe, gravitational microlensing, high-energy astrophysics, galaxy clustering, and fast radio bursts.

The quest for B modes from inflationary gravitational waves.  The tell-tale B-mode signature of inflationary gravitational waves (predicted in 1996 by Kosowsky, Stebbins, and me and by Seljak and Zaldarriaga) is currently being sought by a number of cosmic microwave background polarization experiments.  My collaborators and I have been considering ways to disentangle this B-mode signature from a similar signal induced by Galactic dust, and we are studying observing strategies to optimize the sensitivity of experiments to these B-mode signatures.  Kovetz and I recently completed a review article on B modes.

Galaxy-clustering fossils from inflation.  Much of our knowledge about models for the early Universe come from studying the distribution of galaxies in the Universe today.  Measurements of the  galaxy two-point correlation function is in excellent agreement with the predictions of the simplest inflationary models.  Still, many inflationary models predict characteristic higher-order correlations in the galaxy distribution.  My collaborators and I have been studying different types of clustering patterns that can arise in a variety of inflationary models, and we have been developing observational techniques and strategies to search for these early-Universe relics with forthcoming survey data.

The epoch of reionization and 21-cm fluctuations.  A number of experimental efforts to detect the 21-cm signal from neutral hydrogen from the epoch of reionization (EoR) will soon bear fruit, and subsequent years will bring detailed maps of the intensity fluctuations of this EoR signal.   My collaborators and I have been studying the EoR and also developing novel uses for these forthcoming 21-cm intensity maps.  Examples include novel ways to constrain dark-matter properties; ways to use 21-cm fluctuations to search for primordial gravitational waves; and ways to study clusters and voids with 21-cm maps.

Dark matter.  One of my longstanding interests involves the quest to understand the nature of dark matter that resides in galactic halos, including the halo of our own Milky Way.  My collaborators and I are thinking about weakly-interacting massive particle dark matter, axions and axion-like particles, and other dark-matter candidates.  We are studying an assortment of techniques to detect different dark-matter candidates and developing novel ways to constrain dark-matter properties with astronomical measurements.

Dark energy.  Likewise, I am also interested in the dark energy that is causing an accelerated cosmic expansion rate.  My collaborators and I are exploring new ideas for dark energy, including a recent string-inspired explanation in which an ultra-low-mass axion-like field can account for dark energy.  We are investigating observational avenues to constrain the properties of dark energy, and we are also studying the prospect to seek dark-energy–like fields in the early Universe.

Statistical isotropy and homogeneity.  The standard assumption, and prediction of the simplest inflationary models, is that the statistical properties of primordial perturbations are the same everywhere in space and in every direction.  However, this is an assumption, or prediction, that can, and should, be tested quantitatively.  My collaborators and I have been studying an array of measurements that can be done with the cosmic microwave background and the galaxy distribution to test the assumptions of statistical homogeneity and isotropy.  We are also investigating related ideas, such as the assumption that the cosmological parameters are the same everywhere.

Cosmological birefringence, the CMB, and cosmic parity.   Alnog similar lines, it is usually assumed that our Universe has no preferred handedness—i.e., that the physics that determines CMB fluctuations and primordial density perturbations is parity invariant.  However, the weak interactions are parity breaking and it is generally assumed that primordial perturbations and CMB fluctuations are determined by some early-Universe physics that arises from unification of fundamental forces.  Thus, it is natural to inquire if there are any other manifestations of parity breaking in the Universe.  My collaborators and I have studied the possibility to detect cosmic birefringence, a parity-breaking rotation of the CMB polarization and have also developed a number of other parity tests that can be performed with CMB and galaxy-survey data