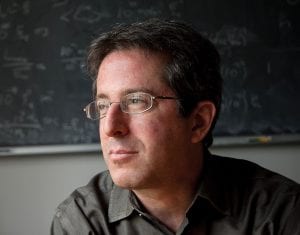 Marc Kamionkowski was born in 1965 in Cleveland, Ohio. He received a B.A. degree in 1987 from Washington University in St. Louis and a Ph.D. in 1991 from the University of Chicago. After three years of postdoctoral study at the Institute for Advanced Study, he joined the faculty of Columbia University in 1994 as an Assistant Professor of Physics.  From 1999 to 2006 Kamionkowski was a Professor, and from 2006 to 2011 the Robinson Professor, of Theoretical Physics and Astrophysics at the California Institute of Technology.  He was the founding Director of Caltech’s Moore Center for Theoretical Cosmology and Physics from 2006 to 2011.  He joined the faculty at Johns Hopkins University as Professor of Physics and Astronomy in 2011 and was appointed the William R. Kenan, Jr. Professor in 2016.

Kamionkowski is a theoretical physicist who specializes in cosmology and particle physics.  Much of  his work has been on the hypothesis that some new elementary particle may constitute the cosmological dark matter.  In 1990, Kamionkowski (with Griest) showed that quantum mechanics provides an upper limit to the mass of a dark-matter particle.  He has made predictions for signatures of supersymmetric dark matter in direct-detection experiments and accelerator experiments, as well as experiments that seek the signature of these particles in cosmic-ray experiments and astrophysical-neutrino telescopes.  His 1996 review (with Jungman and Griest) on supersymmetric dark matter remains the standard reference.

Kamionkowski has also worked on the cosmic microwave background (CMB), a relic of the big bang. In 1993 (with Spergel and Sugiyama), he proposed a method to deduce the spatial geometry of the Universe from temperature maps of the CMB.  In 1996 (with Jungman, Kosowsky, and Spergel), he showed that high-sensitivity high-resolution maps of the CMB could make this measurement precise and simultaneously determine a number of other cosmological parameters.  This work was instrumental in providing the scientific motivation for the generation of ground, balloon, and satellite CMB experiments that, since 2000, have been making these measurements with a precision that has revolutionized cosmology.  This work also introduced to cosmology the now widely-used Fisher-matrix technique to forecast the precision of parameter estimation.  In 1996, Kamionkowski (with Kosowsky and Stebbins) predicted that gravitational waves from the earliest nano-second after the big bang left a unique signature in the polarization of the CMB.  This prediction is now driving the development of a new generation of CMB polarization experiments.  A paper of his (with Jaffe and Wang, 2000) showed that a deep integration on a small patch of sky could improve the sensitivity to the gravitational-wave signal by several orders of magnitude, an argument that motivated sub-orbital experiments like BICEP/Keck, SPIDER, ABS, EBEX, and others.

Some of Kamionkowski’s other contributions include his 1992 work with March-Russell on quantum-gravity violations of global symmetries; his work with Spergel and Sugiyama on reionization; a paper (1994) on light blending in gravitational microlensing; a calculation (with Bahcall, 1994) of the proton-proton reaction that initiates nuclear burning in stars; a pioneering paper (with Lue and Wang, 1999) on CMB probes of parity violation; and his work with Liddle (2000) on broken scale invariance in inflation.  The galaxy intrinsic alignments predcited in his 2000 paper (with Catelan and Blandford) have now been measured, and the tidal-alignment model presented in that paper has now become the canonical model in the rapdily growing literature on this phenomenon.  His 2002 predictions (with Santos and Bromm) of the contribution from the first stars to the cosmic infrared background have been the subject of a number of telescope searches.  In 2003, Kamionkowski (with Caldwell and Weinberg) identified a new, possible end for the Universe, the “Big Rip,” in which a super-accelerated cosmological expansion leads to infinite spacetime stretching in finite time.   In 2006, he showed (with Kesden) that the Sagittarius dwarf’s tidal tails constrain dark matter to fall the same way as ordinary matter in the Milky Way’s gravitational potential well.  Following LIGO’s 2016 discovery of gravitational waves, Kamionkowski and colleagues speculated that the dark matter could be composed of primordial black holes of roughly 30 solar masses, an idea that has been the focus of considerable subsequent attention.  His group suggested (first in 2016 and then another paper in 2018) the idea that early dark energy may account for the Hubble tension.  Kamionkowski has also worked on cosmological phase transitions, galaxy formation, galaxy clusters, the large-scale structure of the Universe, nuclear and neutrino physics and astrophysics, stellar astrophysics, gravitational-wave astrophysics, gravitational lensing, and  alternative-gravity theories and models of cosmic acceleration.

Kamionkowski is a member of the American Astronomical Society, American Physical Society, American Association for the Advancement of Science, and the International Society for General Relativity and Gravitation. He has been awarded an SSC National Fellowship (1991), an Alfred P. Sloan Research Fellowship (1996), a DoE Outstanding Junior Investigator Award (1998), the Helen B. Warner Prize of the American Astronomical Society (1998), the DoE’s E. O. Lawrence Award for Physics (2006).   He was named a Simons Foundation Investigator in 2014 and awarded the AIP/AAS Dannie Heineman Prize for Astrophysics in 2015.  He was elected a Fellow of the American Physical Society in 2008, the American Academy of Arts and Sciences in 2013, the International Society of General Relativity and Gravitation in 2016, the American Association for the Advancement of Science in 2017, the US National Academy of Sciences in 2019, and a Legacy Fellow of the American Astronomical Society in 2020.  He was a Visiting Miller Professor in Physics at the University of California during Fall 2010.  Kamionkowski is the Astrophysics and Cosmology Editor and Editor-in-Chief for Physics Reports and formerly a receiving editor for the Journal of High Energy Physics and the Journal of Cosmology and Astroparticle Physics.   He has served on a number of NASA, NSF, DoE, NRC, and APS committees, on the external advisory panels for several physics and astronomy departments and research institutes, and as a Member and Trustee of the Aspen Center for Physics.  He is currently serving on the Decadal Survey on Astronomy and Astrophysics (Astro2020) Steering Committee.