Dr. Legendre is currently conducting a series of studies aimed at understanding infants’ morphosyntactic competence, using preferential looking and pointing tasks to examine the representations of agreement morphology in French- and Spanish-speaking children. 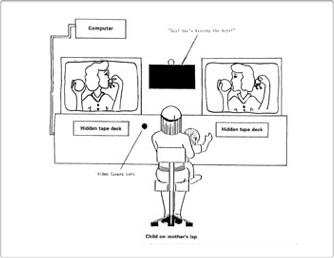 This NSF-funded project is carried out in France and Mexico and its findings have been communicated in several journal publications and conference presentations, many of which are listed in Publications & Talks.

Jane’s current project investigates children’s ability to comprehend and produce complex questions. Previous researchers have shown that children make mistakes when asking a question such as “Who do you believe we should ask?” by saying something like “Who do you believe who we should ask?” Furthermore, when asked a question such as “How did Emily tell Sarah what she bought?” children sometimes respond with what Emily bought, rather than with how Emily did the telling.

Jane conducted two separate experiments to investigate the validity of these claims. To investigate children’s errors of production, she created an interactive story which required children to ask characters complex questions. Children’s productions were mostly adult-like, but also included non-adult-like questions such as “What do you believe that/what can break the spell?” To investigate children’s comprehension of complex questions, a puppet presented children with short stories followed by a ‘tricky question.’ Children overwhelmingly answered these questions correctly, with few exceptions.

By investigating these questions and responses, Jane hopes to shed light on how children learn to produce and understand complex questions and on the underlying representations that affect learning processes. She is also using Optimality Theory in her cross-linguistic investigation of the syntactic variation in these complex questions, and is currently focusing on the use of different structures in Hindi, Hungarian, German, and English.