We are interested in electronically nonadiabatic processes, processes in which the Born-Oppenheimer approximation fails and a molecular wave function can transition radiationlessly between potential energy surfaces. Although the Born-Oppenheimer approximation is fundamental to the way we think about and quantify virtually all of chemistry, its breakdown, rather than being a rare event is quite common, when an electronically excited state is involved. Since electronically excited states are routinely formed when visible and higher energy photons are absorbed nonadiabatic processes are of fundamental importance in such diverse areas as vision, photosynthesis, solar energy conversion, photochemistry and the photo stability of biomolecules. 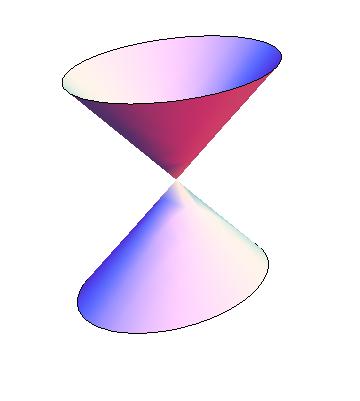 Figure: Idealized illustration of a conical intersection at the convergence of two potential energy surfaces.

Matsunaga, Nikita and Yarkony, David R. Energies and derivative couplings in the vicinity of a conical intersection. 3. The ‘most’ diabatic basis. Molecular Physics. 1998, 93(1), 79-84.

Matsika, Spiridoula and Yarkony, David R. Spin-Orbit Coupling and Conical Intersections. IV. A Perturbative Determination of the Electronic Energies, Derivative Couplings, and a Rigorous Diabatic Representation near a Conical Intersection. The General Case. Journal of Physical Chemistry B. 2002, 106(33), 8108-16.

Some relevant review articles include:

Our current research objectives focus on how nonadiabatic interactions induced by conical intersections are reflected in dynamical process and measured spectra. Another major area of interest is the electronic structure and dynamical aspects of nonadiabatic photodissociation mediated by conical intersections. We have considerable expertise in the electronic structure aspects of this problem. We have extended our method for determining quasi-diabatic coupled electronic state Hamiltonians for bound molecules to handle dissociating systems.

We are currently preparing for publication full 6-dimensional coupled potential energy surfaces for the 1,21A states of NH3. One of the major goals for our research is to extend the range of molecules accessible to this approach and use it to construct highly efficient dynamics on the fly methodologies.

One of the uses of the methodological tools being developed in our group is the calculation of photodetachment spectra. In these calculations ab initio determination of the electron photodetachment cross sections, basically the transition moments to the individual diabatic electronic states for the continuum electron, is important. Despite its importance, this aspect of the problem, a challenging exercise in nonadiabatic electron scattering theory, has received little attention. We have developed a unique, fully nonadiabatic formalism to treat this electron scattering problem, which builds on our above described spectral simulation tools, takes full account of the nuclear kinetic energy, and exact account of electron exchange.