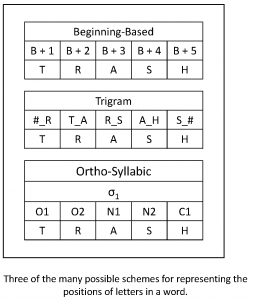 In several recent studies we have probed how the positions of letters in a word are represented in the cognitive reading and writing systems.  Many hypotheses have been proposed.  Consider the word TRASH: The A could be represented as the third letter in the word, the letter following R and preceding S, the letter in nucleus position of the first syllable, or so forth.  We explored letter position representations using letter perseverations in individuals with impairments in reading (participant LHD) and spelling (participants CM and LSS).

LHD is a highly-educated woman who suffered a stroke that impaired her visual word recognition.  In single-word reading tasks, she often erred on individual letters (e.g., reading VILLAGE as VILLABE).  Far more often than expected by chance, incorrect letters in LHD’s reading responses were letters that appeared in immediately preceding responses.  For example, immediately after reading POCKET correctly, she read TOOL as TOOK; and immediately after reading FLAG correctly, she read SAILOR as SAILOG.

We asked whether these perseverated letters appeared in the same position in the prior, or source, response (e.g., POCKET) and in the error response (e.g., TOOK)–and, if so, according to what definition of letter position.  Analyzing a large set of perseverations, we found strong evidence for both-edges representations of letter position, in which the position of a letter is represented relative to both the beginning and the end of the word.  This conclusion followed from the finding the LHD’s perseveration errors maintained the source’s beginning-based position (as in the POCKET-to-TOOK perseveration) or the source’s end-based position (as in the FLAG-to-SAILOG error).

Analysis of letter perseverations in spelling tasks by participants CM and LSS led to the conclusion that letter position is also represented according to a both-edges scheme in the cognitive spelling system.