Expression of GFP-tagged RNA-binding protein that we are characterizing for its novel role antagonizing microRNA function.

Since their discovery a little over two decades ago, microRNAs have emerged as pervasive, conserved, post-transcriptional regulators of gene expression. In the Kim lab we study how microRNAs control fundamental biological processes including cellular differentiation, post-embryonic development, and oncogenic cell proliferation. We are interested in addressing the question,

To identify and characterize factors involved in microRNA regulation the Kim lab employ a combination of genetic, genomic, biochemical, and proteomic techniques. The robust and facile genetics of C. elegans and the ability to use it in high-throughput methods make it an attractive in vivo system for this task. Historically C. elegans has been an important model system for the study of microRNAs: the first miRNAs, lin-4 and let-7, were discovered in genetic screens for factors that controlled the timing of cell division and differentiation during C. elegans development (Lee et al., 1993; Wightman et al., 1993; Reinhart et al., 2000). Work from our lab has identified a host of potential factors that may influence microRNA function: A genome-wide RNAi screen in C. elegans identified many candidate genes that await characterization (Kim et al., 2005). We have also identified novel proteins that interact with microRNA pathway proteins by mass spectrometry. These two complementary approaches recently led to our discovery that the highly conserved serine/threonine kinase Casein Kinase II (CK2) facilitates microRNA silencing by modification of the microRNA protein co-factor.

Two areas of active microRNA research in the Kim lab are (1) elucidating the role of post-translational modifications to proteins that function in microRNA biogenesis and silencing, and (2) investigating how RNA-binding proteins affect silencing by the ribonucleoprotein microRNA effector complex. We are also interested in deciphering how microRNA regulation is modulated under adverse conditions, including environmental stress. Since the microRNA pathway is highly conserved from human to worm our findings have the potential to translate to the eventual treatment of human disease as microRNA dysregualtion is a hallmark of cancer and is implicated in a variety of other human pathologies. 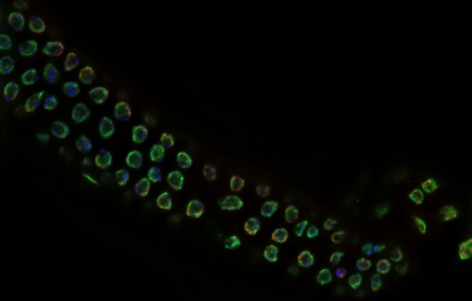 Endogenous small RNA pathways in C. elegans, including siRNAs and piRNAs, are required for critical germline processes including repression of invasive genomic elements, maintaining an epigenetic memory of gene expression, and orchestrating heterochromatin deposition at target loci. The significance of these functions is highlighted by the severe fertility phenotypes observed when these small RNA classes are lost, as loss of piRNAs leads to temperature-sensitive sterility and loss of nuclear siRNAs leads to progressive sterility (germline mortality).

In order to understand how these pathways are regulated and why they are so critical for germline function, we are using genetic, molecular, and biochemical techniques to identify novel components of these small RNA pathways and to establish a mechanistic connection between small RNAs and chromatin organization and genome defense. Current projects include (1) Identification of factors controlling differential expression of small RNA classes in male versus female germline, (2) characterizing the role of endogenous siRNAs in transgenerational chromatin organization, and (3) identification of novel factors promote or suppress endogenous siRNA effector functions. 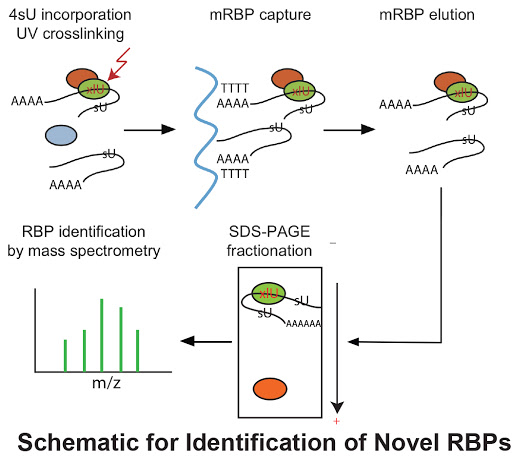 RNA-binding proteins (RBPs) are crucial components of a diverse range of cellular processes. They serve critical roles in post-transcriptional gene regulation (PTGR) by assembling RNAs and other protein co-factors into higher-order ribonucleoprotein (RNP) complexes to regulate RNA splicing, transport, storage, stability, and translation. We have identified hundreds of novel RBPs in yeast and nematodes and are actively seeking explanations for why these proteins – with primary roles in transcription, cellular trafficking, and metabolism, among others – might posses RNA-binding abilities. To understand the specific roles of novel RBPs, our lab combines classical biochemical and molecular genetics approaches with high-throughput crosslinking and deep sequencing of direct RNA target sites to discover how RBP:RNA interactions affect RNA translation, stability, localization, and degradation. 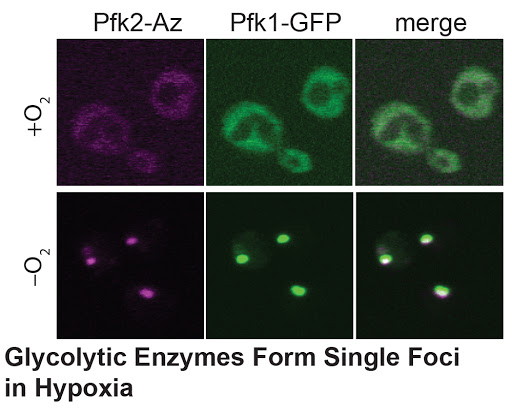 Among these novel RBPs were several glycolytic enzymes. An emerging theme in biology is the reorganization of normally diffuse proteins into facultative non-membrane bound compartments in response to various signals and cellular stress. These granules are comprised primarily of RBPs and RNA. Our lab has shown that hypoxic stress induces the formation of a novel granule containing glycolytic enzymes in S. cerevisiae and human hepatocarcinoma cells that we call “Glycolytic Bodies”, or “G bodies”. Further characterization of these granules revealed that cells with G bodies consume glucose at faster rates than cells without and cells with genetically impaired G body formation are deficient at cycling through the entire glycolytic pathway suggesting these granules enhance the rate of glycolysis, possibly by concentrating all the reactions in the pathway. Proteomic analysis of these granules revealed a number of proteins 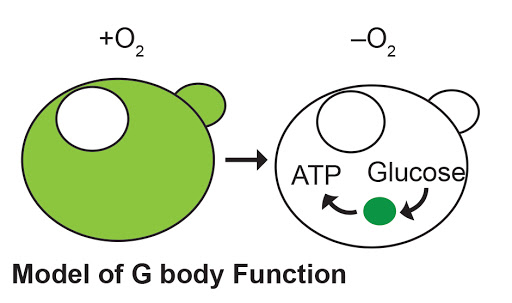 constituents of G bodies and several factors required for G body formation. Many questions remain open including how the biophysical properties of the proteins involved and their interactions with RNA contribute to the structure and formation of G bodies, how various identified signaling pathways cooperate to form signal coalescence of enzymes and how these properties are conserved in human cells. Answering these questions and further characterizing the function of non-canonical RBPs remain key interests of the lab. We are using mammalian cell culture, yeast and a variety of microscopy techniques in conjunction and in addition to biochemical and genetic manipulations and techniques to explore these questions further.