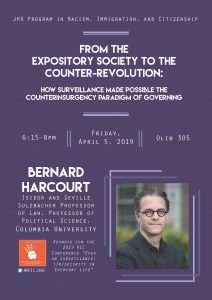 Bernard Harcourt: “From the Expository Society to the Counterrevolution: How Surveillance Made Possible the Counterinsurgency Paradigm of Governing”

Bernard E. Harcourt is the Isidor and Seville Sulzbacher Professor of Law, Professor of Political Science, Executive Director of the Eric H. Holder Initiative for Civil and Political Rights, and Founding Director of the Columbia Center for Contemporary Critical Thought at Columbia University. His scholarship intersects social and political theory, the sociology of punishment, and penal law and procedure.

He has published extensively on a diverse set of themes, including criminal justice, incarceration and policing, surveillance and dataveillance, neoliberalism and free markets and has edited and co-edited several lectures by Michel Foucault. Harcourt represented death row inmates in Montgomery, Alabama, at what is now the Equal Justice Initiative. He continues to represent inmates sentenced to death or life imprisonment without parole pro bono. He has also served on human rights missions in South Africa and Guatemala.