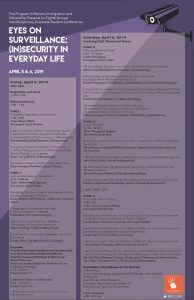 This year’s conference interrogates the normalization of surveillance in our everyday life. Going beyond “surveillance” as a buzzword, the conference will present interdisciplinary research that considers what might constitute the monitoring of bodies and actions across a variety of lived experience. To deepen our understanding of surveillance, we ask: How can we critically think about the ways constant scrutiny exacerbates, rather than resolves danger, risk and fear, often for marginalized groups? Can we imagine surveillance as something that multiplies modes of insecurity rather than reducing them?

Bernard Harcourt, Isidor and Seville Sulzbacher Professor of Law, Professor of Political Science, Columbia University will deliver the conference keynote: “From the Expository Society to the Counterrevolution: How Surveillance Made Possible the Counterinsurgency Paradigm of Governing.”

The conference will conclude with a roundtable titled, “Surveillance on the Ground’ with Dornethia Taylor (Black Lives Matter DC), David Rocah from (ACLU-Maryland), and Emily Manna (Open the Government). Stuart Schrader (Department of Sociology, Johns Hopkins) will chair the roundtable. The event will be held on Saturday, April 6 from 4-6 p.m. in Sherwood Room, Levering Hall.

Febi Ramadhan (Northwestern University, Anthropology): Capturing the Pain of Other: The Everyday Reenactment of Disidentification toward Homosexuality by the Spectators of Public Caning in Aceh, Indonesia

Keynote: Bernard Harcourt, Isidor and Seville Sulzbacher Professor of Law, Columbia University
“From the Expository Society to the Counterrevolution: How Surveillance Made Possible the Counterinsurgency Paradigm of Governing”
6:15-8 p.m.
Location: Olin 305

Khalil Habrih (University of Ottawa, Sociology): Living Under Surveillance. Critical Ethnography as a Space of Rupture: The Case of the Goutte d’or: Understanding Police and Race through Affects and Corporeality

Fathima Azmiya (Technical University of Mombasa, Department of Social Sciences): Navigating between Intrusive, Indiscriminate and Effectiveness of Community Surveillance in the Wake of Transnational Waves of Terrorism in Kenya

Themal Ellawala (University of Illinois at Chicago, Anthropology): On the Austere Gaze: Surveillance and Disciplining of Queer Excess on the Streets of Colombo

Krystle Shore (Waterloo University, Sociology and Legal Studies): Exploring Experiences with, and Implications of, the Surveillance of Vulnerable Populations: An Empirical Study of Project Lifesaver