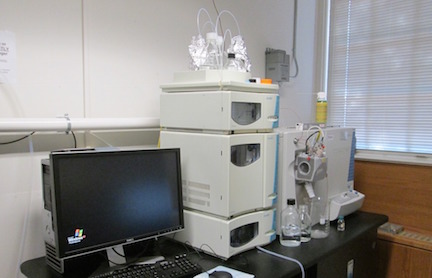 The LCQFleet is an electrospray equipped ion-trap based LC-MS system used for routine LC-MS analysis of biological molecules such as metabolites, proteins, oligonucleotides, etc. The LC can accmodate solvent pressures up to 600bar, nessecary for todays high effieciency small particle columns. The instrument is equipped with an autosampler for multi sample analysis, four seperate solvent feeds (normally Water, acetonitrile, methanol and a spare) and a photodetector for spectroscopic detection of analytes to complement the mass spectral detection. The mass spectrometer is an ion-trap based instrument capable of performing both MS and MS/MS analyses in both the positive and negative ion modes. The instrument is equipped with deconvolution software for the deconvolution of high mass multiply charged ion species typically observed when biological macromolecules (such as proteins, peptides and oligonucleotides) are analysed by electrospray mass spectrometry.

This instrument is normally operated by researchers and users themselves following training with the facility manager. The instrument is located in Room B14, Remsen Hall.