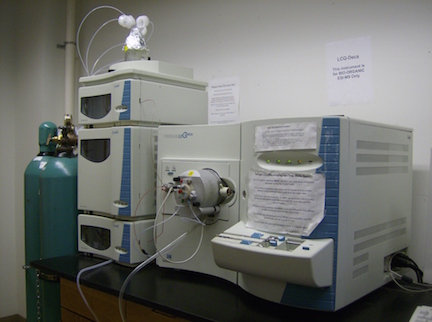 The LCQ is an ion-trap based instrument normally fitted with an electrospray (ESI) ionization source (APCI is also available if required). It is capable of operating in both positive and negative ion modes and is primarily used to analyze bio-molecules in solution such as proteins, peptides, biopolymers and oligonucleotides. The instrument is particularly useful for structural characterization of such species due to its ability to perform multiple stage (MSn) ion fragmentation analyses (up to 10 stages), allowing ion-mapping experiments to be conducted. It is also useful for analysis of high mass species that form multiply charged ions with ESI (such as proteins, peptides) due to the post-acquisition de-convolution capability of the operating software. It can be operated on a stand-alone basis with solution samples introduced by direct infusion using a syringe pump, or integrated with a Finnigan Surveyor LC system for LCMS applications.

This instrument is located in Room B06, Remsen Hall.